An allergy, be it one or many just blew the lid off the ‘normal’ box. The black pepper spice was no longer a welcome addition in my house after being diagnosed with it as one of my food allergies. Then I began to learn where black pepper was hidden and not so hidden in the grocery isle. I mean seriously, you can’t turn around and sneeze without sneezing on an item that has black pepper as an ingredient, unless of course you are standing in the bread isle. Okay, that is another of my allergies, but we will save that for another story. Canned foods, frozen foods, chips and don’t even get me started on black pepper in cosmetics. But since this gal is single the biggest thing that I wondered about would be how would any new partner handle this? Would I be worth the trouble? Okay, I know I am worth the trouble but still.  (New relationship stuff is hard work already let along stuff you really have to avoid.) Is there anyone out there would even try to step outside that box with me?

There are people who do step outside the ‘normal’ box.  Can you imagine yourself with someone who has absolutely no problem, eating, and making and even enjoying the foods that were made to accommodate the allergies. Could it be that you find someone that helps you in the kitchen, supporting those choices to stay away from the foods that make you sick or even kill you?

There are people out there that will and do work with the what needs to be done, most folks would believe that these foods, like chicken, salad and rice since they were prepared by a AP (allergy person) were now foreign items that came from the moon! Ewwww do I have to eat that? It doesn’t just have salt and pepper on it!! Oh, come on now don’t make me eat that!  I found someone like that, he never once said those words,(and it is important that he once never said those words) he just kept saying how sorry he felt for me since my life wasn’t ‘easy’ anymore. Of course that is a story in itself. I know if I had kept that perspective in trying to live in a salt and pepper world, I would have failed miserably feeling more sorry for myself.. Bland chicken, tasteless rice and dry salads would have been the yucky norm. 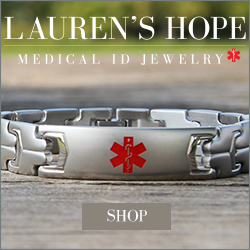 So he stepped outside the box with me and we experimented. I was nervous considering the reception that I had gotten from most when I told them that I couldn’t eat the standard spice staples. I was just thankful I had experimented with spices for a while and had some combinations down pat. My taste buds didn’t know what hit them. The explosion of sage on your tongue wrapped in a tad bit of garlic on your pork is so yummy. Yes, guys I said the word yummy! There is this whole world to discover in spices such as ginger, rosemary and sage and so many more. I had the basics down and introduced them to him. First I could see his eyebrows raise and I could hear the wheels going, “What have I gotten myself into?”. But our first dish had become of the favorite dish that he always wants me to make. I hadn’t introduced him to all the spices, there was no rush because outside that box there is a whole fascinating world to discover. When there are things that you can introduce slowly, and keep the mystery building, it’s always good. Discovering the new taste combinations from the thousand ways to blend spices and they are not just for meat. You know that you are doing something exciting when they begin to work with you in building and deciding on the next thing will be cooked.

So let the story give you hope in dumping the black pepper spice and kicking it to the curb. (achoo, I kicked it to hard.) There are people out there who will work with you in protecting you from your allergy. Be patient with them, it’s a new world to them as well. Know that if they aren’t willing to work with you that you don’t need them in your life. It is not a strange life styly thing you have going on or a passing phase sort of diet. These meals that you will prepare are still normal food, just spiced differently. Besides, it’s to expensive to get food from the moon.